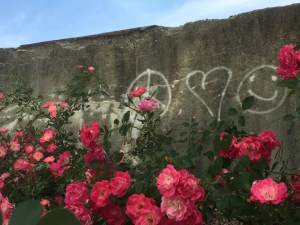 My relationship with May (the month, not the person – whoever they are) is complicated. It always starts off ugly, with final papers and revisions and projects stacked so high that a toppling would surely be catastrophic. Each time I doubt my ability to dig myself out but each time I miraculously do. I force my way into the late spring sunshine, covered in paper cuts and a little delirious and most importantly free.

That giddy freedom lasts about two seconds before the mid-May melancholy hits. I’ve often wondered how common this stage is, because it’s mandatory for me. It falls somewhere among rushed packing and waving school friends goodbye and awkwardly reinserting myself back into my hometown. This year, the summer I decided to embark on the Dietrich Honors Fellowship, the melancholy hit me especially hard for several reasons I can pinpoint. For one, I recently had to bid farewell to a few good friends. One graduated, while another handful will be living two neighborhoods away next year — crazily, our last year — instead of two doors down the hall. I also feel like I’ve had half my time stolen by boxes and storage lockers and moving trucks.

Usually, my feelings toward May brighten up toward week three. How could they not? The weather’s beautiful; I relax into my old family dynamic and into the strange new freedom; I get psyched for this internship and that vacation and the possibilities seem limitless.

But May is ending, and I’m still floating in limbo. Since I’m based in Pittsburgh for roughly the first half of the summer, I opted not to spend 10 hours on a bus for only a weekend at home. Much as I loathe those bus rides, I can’t remember the last time I didn’t spend Memorial Day with my family. It’s weird. Plus, I’m between leases right now, so I feel like a glorified squatter, exchanging groceries and gratitude for friends’ couches and spare rooms. How I’ve survived this long without A.C. or WiFi, I have no idea. Tomorrow, I move for real into my first grown-up apartment, with utilities not included and everything. It’ll be hectic, no doubt. I expect not owning a mattress is quickly going to become an issue. But it also feels like a turning point in my summer; honestly, it feels like the start.

About two weeks have passed since I turned in my last assignment and officially began the fellowship. That time has been a blur of finishing up old projects (among them a short film and a 35,000-word novella), venturing into never-before-touched corners of the city, researching potential volunteer opportunities and sitting with dear friends in the shadiest, lushest spots of grass I can find. I’ve been taking on my thesis work in bite-size pieces, gradually picking up momentum. I read two and a half adviser-recommended novels. I bought a new journal and filled a dozen pages with brainstorming. I’ve even gone on a few online dates (all for research purposes, of course) with queer people from an amazing range of backgrounds: a half-black bisexual musician; a small town non-binary programmer; and even a recent immigrant from Iran, where homosexuality is punishable by death.

My mind is buzzing with stories worth telling. I feel like I could bang out a draft or two yesterday, but I’m restraining myself. I need to whittle down my ever-growing list of ideas, develop three-dimensional characters beyond the foundation of their intersectional identities (many of which have rarely seen the light of mainstream media) and find a compelling web of connections between them. It’s early days, but even the bare bones of these stories are crazy exciting to me.

As May bleeds into June, I am so ready to be consumed by this project. I’ve just got to circumvent the summer haze, exacerbated by the terrifying fact that I’m setting my own schedule here. I’ve done a lot of living these past couple weeks, but for the life of me I couldn’t tell you what happened last Tuesday. I know it’s going to be a challenge, but hey, if I wasn’t up for a challenge, I would never have signed on for this summer. So let me at it.

Why are the rocks imprisoned? Have they misbehaved?