Eleven Dietrich College Honors Fellows are poised to begin their senior year with a head start on piloting psychological studies, conducting field research and laying the groundwork for film and writing projects.

Over the past three months, the fellows have examined citizenship and belonging in South Korea, the impact of La Loi Toubon on French nationalism and coming of age as a Vietnamese American, among other topics.

Recently, they presented their works-in-progress to each other and faculty members including their advisers and fellowship program directors Jennifer Keating-Miller, Brian Junker and Joseph E. Devine.

“This summer’s group was particularly impressive,” said Devine, associate dean for undergraduate studies in the Dietrich College of Humanities and Social Sciences. “While their topics were interestingly diverse, they displayed shared qualities of high enthusiasm, confidence and preparedness that served them well this summer and will surely continue to do so over the coming academic year.”

It’s been two weeks since I’ve returned to Pittsburgh, and I am already knee-deep into my research. If you haven’t had a chance to read about my project, I will be examining the return migration of Korean-Chinese women to South Korea as migrant brides.

A little background information: The Korean-Chinese are Chinese nationals of Korean descent, and one of the 55 officially recognized ethnic minority groups in China. A large majority of the Korean-Chinese community resides in a province called Yanbian in Northeast China. In recent years, Korean-Chinese women from Yanbian have been migrating to South Korea in large numbers, mostly through international marriages to South Korean men in rural regions. I am interested in understanding the migration experience of Korean-Chinese women, and, in particular, I want to explore how they negotiate notions of kinship, gender and ethnicity to create a more flexible sense of belonging and citizenship.

I am really excited to be spending this summer researching the return migration of Korean-Chinese women, and I am very grateful to the Dietrich Honors Fellowship program for providing me an opportunity to pursue this project. I first became interested in the topic last semester, when I was taking a course called “Trafficking in Persons” with my wonderful adviser, Judith Schachter. Though I ended up writing my final paper for the course on Korean-Chinese marriage migration to South Korea, I felt that I did not have enough room to explore all the complexities of the topic. I believe this summer will give me the time and space necessary to develop my ideas further and make the necessary connections between the overarching themes. This research project is one of personal interest to me, because of its connections to my background as a female immigrant from South Korea. Throughout my life, I have also had to negotiate multiple cultural and national identities, fluctuating between life in South Korea and the United States. I believe that gaining an understanding of the Korean-Chinese women’s migration experience will provide me with an opportunity to reflect on and come to terms with my own experiences as an immigrant in the United States.

So what exactly does my research entail? A large portion of my research will be based on fieldwork, which will involve participant observation and in-depth interviews with Korean-Chinese women in Seoul, South Korea and Yanbian, China. I will travel to Korea in August to conduct research there for a month, and spend my fall semester in China through a study abroad program. During the final month of my study abroad program, I will have an opportunity to travel to Yanbian and conduct independent research. Because I will not be able to conduct firsthand research until the end of summer, my current goal is to read as much existing literature as possible. I’ve been spending a lot of time browsing through the East Asian Collection at the University of Pittsburgh’s Hillman Library, which I’ve found to be an amazing resource. I’ve been pleasantly surprised at the amount of sources they had available on the topic, in both Korean and English. I’ve also been revisiting some of the older sources I had gathered last semester while I was taking Judith’s course.

As I learn more about the topic, I am becoming increasingly aware of its intricacy. So many different socioeconomic and cultural factors, such as South Korea’s rapidly aging demographic, rural gender imbalance, Korean ethnic nationalism and transnational economic inequalities, are entangled with one another to influence the lives of Korean-Chinese migrant brides. These factors are further complicated by the Korean-Chinese migrant women’s sense of agency, kinship relations and distinct cultural and ethnic identity. While I realize that the focus of my research will need to be more narrowed down in the future, the trajectory of my research will depend heavily on the findings of my fieldwork. So for now, I am trying to keep an open mind and absorb as much information as possible. 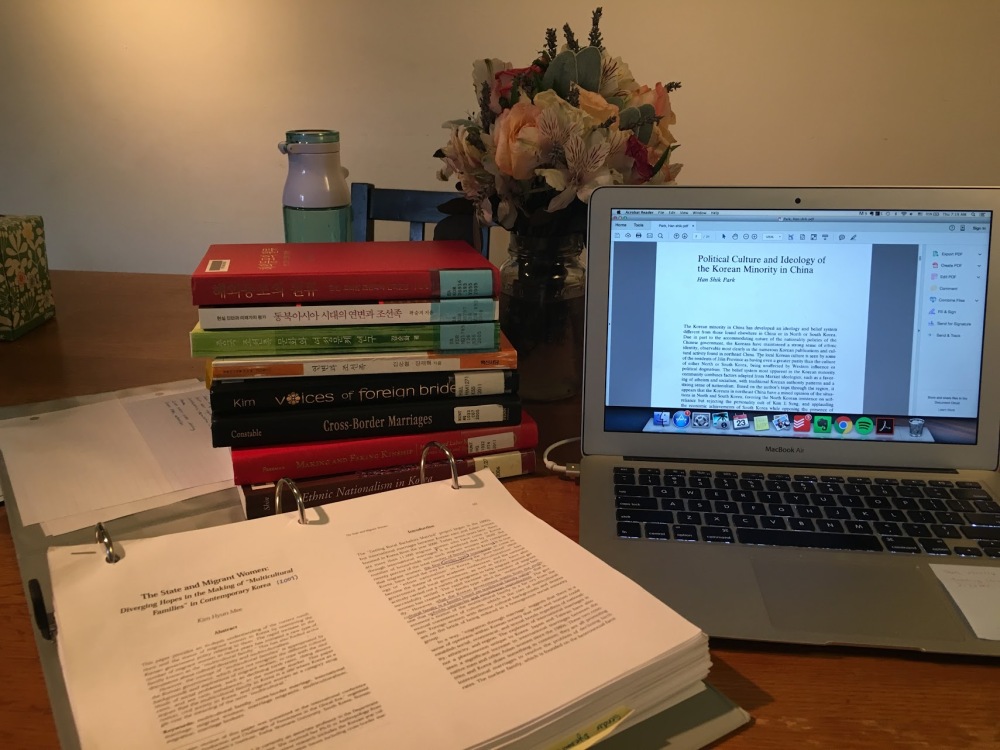 When I am not burying myself in the giant pile of articles and books, I find myself busy preparing for my trip to Korea and China. I finally purchased tickets for my flights this week (woo-hoo!), and the fact that I will be abroad for an entire semester is really starting to hit me. With the trip coming up so soon, I’ve been trying to reflect on my role as a researcher and to be more thoughtful about my methodology. My dual identity as both an insider and an outsider will put me in a unique position throughout my research process. In the sense that I was born, raised and educated in South Korea for 11 years, I could be considered an insider, but the nine years that I’ve spent in the United States also gives me the perspective of an outsider. I hope that I can balance these two identities to be more perceptive and sensitive to South Korean culture, but also to maintain objectivity as a researcher. I have to admit, I am feeling a bit nervous about doing fieldwork, but more than anything, I am excited to immerse myself in the field and listen to the stories of Korean-Chinese marriage migrants. I hope that my research will contribute meaningfully by genuinely representing and amplifying their voices, which too often go unnoticed.

I came to the United States at the age of 11, when I was given up for transnational adoption by my family in South Korea.

I met my adoptive parents for the first time when I landed in Chicago O’Hare International Airport. The middle-aged couple, who were first-generation immigrants from South Korea, lived in a small town in Indiana. They welcomed me into their home, and the adoption process was finalized within one month of my arrival. My name was officially removed from my biological family registry, and the strangers that I had met at the airport became my legal parents. Everything had happened so quickly — and before I even had a chance to process what had happened, it all fell apart.

My adoptive parents, who had never had any children of their own, thought of the adoption as a business transaction. They expected to be monetarily compensated for the adoption, and demanded a large sum of money from my biological family. When they realized that my biological family was unable to pay, they kicked me out of their home. After being in the United States for only three months, I was abandoned by my adoptive parents, and left without a home, family or legal status.

I spent the next three years as an undocumented immigrant in the United States. These three years were definitely one of the most challenging periods in my life. At first, I had nowhere to go, and no one to ask for help. I was unable to attend school due to my undocumented status, and I thought I would never be able to go to college. Eventually, I was fortunate enough to meet a new family who took me in under their roof. They gave me a place to stay, and genuinely cared for me and supported me. With their help, I was able to fight a long and difficult legal battle against my adoptive parents, and finally gain lawful permanent residency.

Sometimes I wonder what life would have been like if I had not come to the United States, but I find it impossible to imagine myself in an alternate narrative. My background as a transnational adoptee and an undocumented immigrant is a fundamental part of my personal identity. My interest in studying the migration narratives of others stems directly from my desire to understand my own experiences as an immigrant. Exploring the topics of migration, citizenship, and belonging provides a way for me to process and come to terms with my own struggles in search of belonging and national identity.

Learn more about my project.